LATAM strengthens its presence in Ceará

One of the largest airlines in Brazil has just announced that it is strengthening its presence in Ceará during the rest of the year. LATAM is introducing two new flight bases within the state and increasing its passenger capacity. By the end of the year, LATAM will have more bases in Brazil than before the pandemic and have recuperated almost all of its domestic flight programme.

According to LATAM, the state of Ceará accounts for a large part of the strong domestic growth seen by the airline in the last year. As a result, it will be substantially increasing its flights to airports in the state.

By November this year, LATAM intends to add 66% more domestic flights to Ceará compared to those programmed in August. More seats will be available to established bases such as Fortaleza Airport as well as smaller airports in the state.

LATAM plans to reinforce its flight bases in Northeast Brazil, one of the favourite holiday destinations for Brazilians. The airline will introduce flights to two new airports in Ceará by the end of the year.

At the beginning of November, LATAM will commence flights between Juazeiro do Norte in Ceará and Guarulhos. The service will be available on a daily basis.

A month later, flights will start between Jericoacoara and Guarulhos. It will also be a daily service. Between them, the two flights will offer almost 200 seats.

Back to pre-pandemic levels

The rise in domestic tourism has prompted the move by LATAM to increase its presence in Northeast Brazil, particularly in Ceará.

“We are confident that as the vaccination programme advances in Brazil, people are thinking about travel plans again,” said Diogo Elias, Director of Marketing for LATAM Brazil.

LATAM will also be operating on an almost full capacity basis. According to the company’s calculations, by November, it will have 87% of the seats available in 2019.

The state was one of the fastest growing areas in Brazil for tourism, both domestic and international during 2019. And it has since shown its capacity to bounce back despite lockdown and travel restrictions.

Since August last year, Ceará has regularly registered higher tourism activity levels than the rest of Brazil and Fortaleza Airport has seen a steady increase in passenger traffic. Foreign visitors are expected to return by the end of this year as international flights resume.

In addition, lesser-known destinations in the state such as Flecheiras have risen in popularity as Brazilian holidaymakers seek quieter and less crowded holiday spots.

The Coral Beach Resort has just welcomed the first family to stay at the fractional property they own at the resort. João 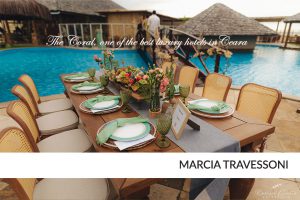 Ceará has long ranked as one of the Brazilians’ favourite places to go on holiday. The region’s long sandy beaches with warm